Last week I mentioned a few fun creative swaps I’ve been participating in.  One of those was a poetry swap, and I was lucky to have its organizer, Tabatha Yeatts, as my swap partner.  (Here’s my post about it on my author blog.)

In addition to a wonderful poem, Tabatha sent me some fine hand-crafted teas (from an Etsy vendor!) and – be still my heart – a lovely old book. 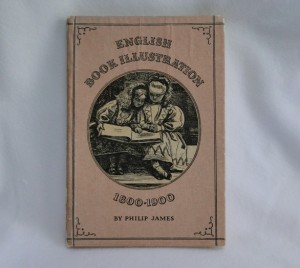 ENGLISH BOOK ILLUSTRATION 1800-1900 by Philip James is a delightful, slim volume chock-full of creative greats of the 19th century.  The book was published in 1947 by The KING PENGUIN Books (London and New York.)  You’ll likely see it here again, because there’s too much goodness in it to share in one post. 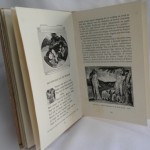 Tabatha couldn’t have bestowed this gift on a more appreciative recipient – I’m lapping it up like a kitten at a saucer of milk.  On my only trip (thus far!) to New York, while my daughter and friends went to the top of the Rockefeller, I snuck away to the (Pierpont) Morgan Library & Museum (okay, that’s another post, too, because a talented young architect who is the niece of my good friend Peggy was involved in its recent renovation). The point of this side journey here is just to mention that I spent all of my souvenir money on one thing – a delicious hardback book documenting an exhibit they’d hosted previously.  BE MERRY AND WISE, Origins of Children’s Book Publishing in England, 1650-1850 by Brian Alderson and Felix de Marez Oyens is huge, heavy, and brimming with history and exquisite illustrations.  I left the $115 price tag on its back.

So I am a very grateful nerd to have Tabatha’s gift to add to my shelf, which also includes such nerdy titles as A HISTORY OF THE BOOK IN AMERICA (Amory and Hall, eds.), THE NORTON ANTHOLOGY OF CHILDREN’S LITERATURE (2005), THROUGH THE EYES OF A CHILD (by Donna Norton, 1983, bought when I was in college or thereabouts and just because I wanted it), and THE ARBUTHNOT ANTHOLOGY OF CHILDREN’S LITERATURE (late 1950s?), which I’ve had on extended loan from my mother-in-law, and several volumes about reading and writing in 17th Century America. 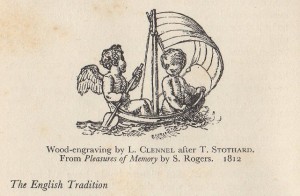 ENGLISH BOOK ILLUSTRATION 1800-1900 features many representative black and white illustrations as well as color plates in the back.  These include woodcuts, wood engravings, copper-plate etchings and engravings, aquatints, mezzotints and hand-colored lithographs.  The century opens with Thomas Bewick and William Blake and moves on to the work of  Constable, Turner, Cruikshank, Crane, Carroll, Tenniel, Whistler, Beardsley, Caldecott, and Greenaway, just to name a few! 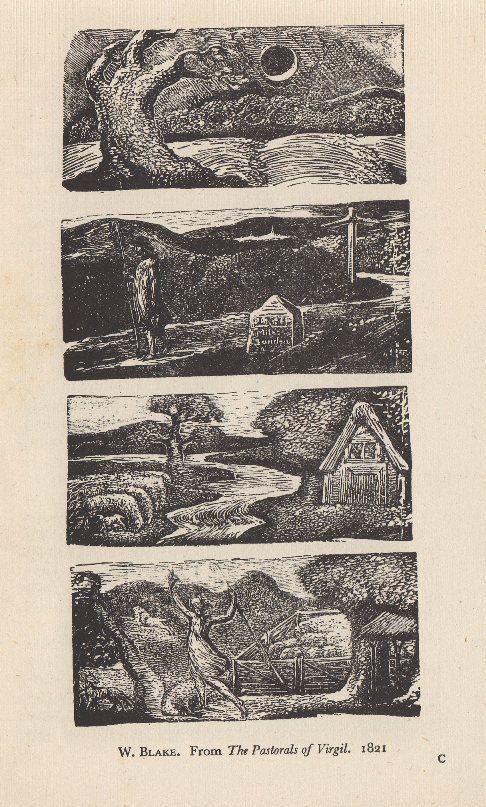 I am enjoying gems of commentary, such as:

Illustration is like décor in the ballet, one of several arts planned by a team of artists.  Dance, drama, music and design together make a spectacle in which each has its share.  Similarly, type, paper, binding and illustrations must all contribute to the art of the book. (p. 8)

Looking at illustration against the backdrop of a swiftly changing world, James writes:

With the surge of industrial development that followed the railways, sheer stark ugliness prevailed everywhere, but at all times there were book artists who displayed a widely varying mixture of these three typical characteristics, the love of Nature, a literary bias and the romantic temper; and in so doing they maintained the English tradition. (p. 13) 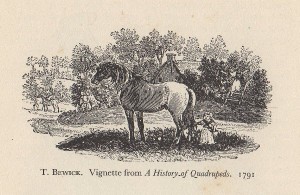 Bewick was the first British wood-engraver to earn and deserve a continental reputation. … Chief among his innovations was a new conception of the black and white picture.  He did not think of it as a white space on which black outlines and solids made a linear design printed in relief, the background having been cut away to a lower level, as in the woodcuts of the fifteenth and sixteenth centuries… . Instead he began with a black void out of whch the subject appears in a varying range of grey tones with pure white for the lightest parts. (p.18)

And, in describing a particular image on the second plate in the back, James presents painter J. M. W. Turner’s contributions to illustration in these words: 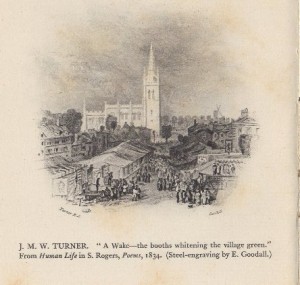 They almost seem to have been breathed on the page; each subject melts away in an airy perspective on the dead white surface of the paper. (p. 26)

Finally, a sentence that seems as applicable today as it was 60-plus years ago:

But in time every new technique is assimilated by the artist and the fluctuating struggle between the crafts and the machine becomes not a battle for extinction but a source of vitality. (p. 14)

I hope so.  I’ll never lose my bias, however, for a good old-fashioned, deckled-edge, well-crafted book!

Thanks for taking this detour back with me – there will be more, I’m sure.  Do you have a favorite artist from the past who inspires you today?